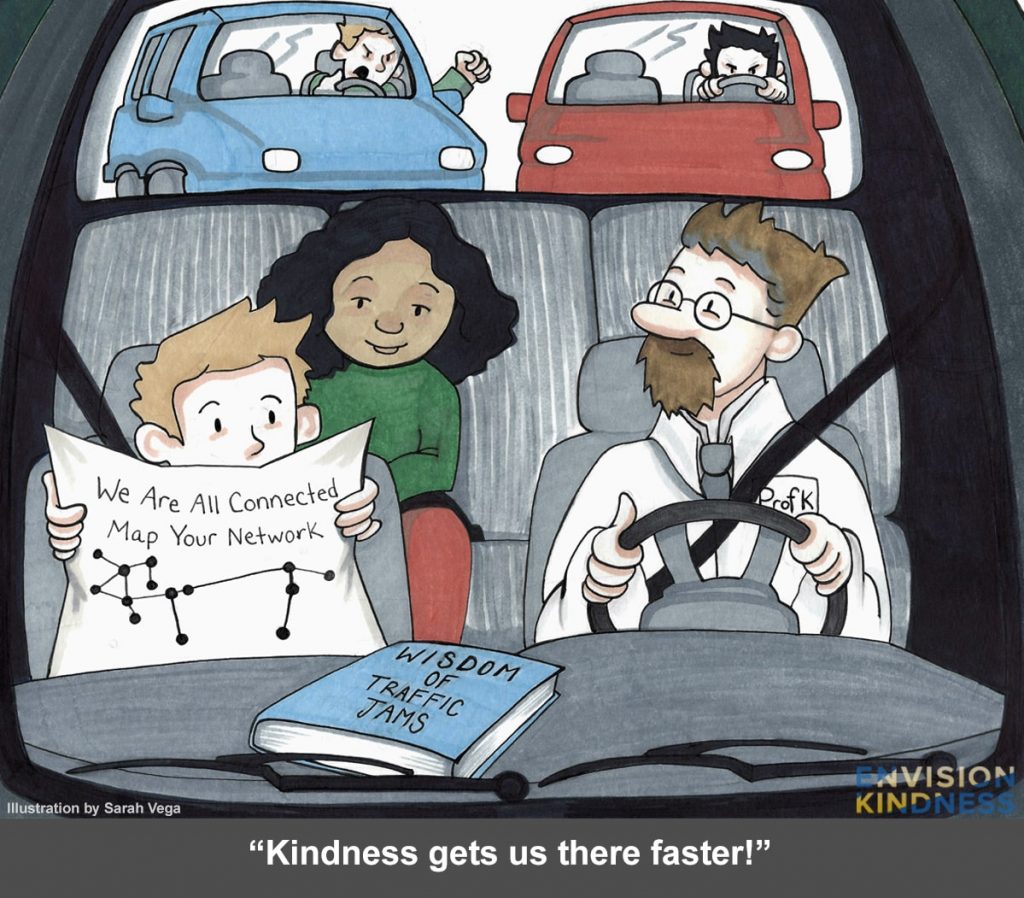 One of my professors in medical school told us on many occasions that “repetition is the key to success.”  What he meant is that by focused and repeated study of core concepts we would be successful in helping patients.

In the present case, the teaching to keep repeating is that we are all connected to one another in many different ways.  Once we recognize that we are all part of a larger whole, then kindness, compassion, and collaboration flow readily.  Kindness, in turn, strengthens the quality of the network for everyone.

We are all part of a larger whole.

of that network for everyone.

Driving provides many illustrative examples that almost everyone has experience with.  Imagine a traffic jam where three lanes are merging into one due to an accident.  The mixture of trucks and cars provides a challenge as to how to get past this merger as quickly as possible; traffic is backed up for a mile.  At that moment in time, all of the drivers (and passengers) are connected to one another.

Some who do not recognize the connection may abruptly squeeze in and jump lanes. As they do, the slow but smooth flowing intermixing of cars is interrupted, forcing others to rapidly stop. A chain reaction occurs that ripples down the line of traffic requiring many people to stop, delaying progress for everyone, potentially causing accidents, and likely evoking a lot of negative emotions.

Transportation scientists, who have modeled this process (in very complex math), estimate that traffic time could improve ~25% if people took turns merging and, notably, “behaved better.”[1]  That would translate to 15 minutes saved off an hour delay.  Connecting through courtesy (kindness) gets you there faster.

The accident, it turned out, was caused by a driver who was angry about something that happened at work; he cut off a slower, elderly couple.  They lost control of their car which barrel rolled into a ditch on the side of the road. Thankfully, the car’s airbags and other safety features saved their lives.

What/who induced the road rage? As those who display road rage tend to have more anger in general[2] we can envision a scenario in which something happened at work—perhaps criticism from his boss, denial of a promotion, etc.  Perhaps that driver had more difficulty managing that anger because he was upset—his son was bullied and refused to go to school that morning.  The bully, in turn, was reacting to the divorce of his parents….you get the point.

On the positive side, the people who designed and assembled the car did a very good job, resulting in minimal injuries. Their connection to this event was the care that they put into their product.  Other people immediately got out of their cars to help them.  Some of them had a relative saved from a car wreck….

The events of life are almost never simple.

we tend to over simplify.

This often conceals the true complexity of life.

The point of the thought exercise is to illustrate that the events of life are almost never simple.  There are multiple factors (variables) affecting how things manifest.  As our minds don’t like complexity, however, we tend to reduce the number of variables to as few as possible.  A linear logic sequence like “this caused that” (a single causal factor) is preferred and is also the basis of most scientific experimentation.  This oversimplification often conceals the true complexity.

One way to visualize how we are connected to each other comes from Stanley Milgram, a 20th century psychologist.  Milgram helped develop the concept of “six degrees of separation,” that is, any single person is separated from another by 5 other people.  Also referred to as the “small world problem,” it states that you, the reader, are connected to the Dalai Lama, Steph Curry, Taylor Swift and many others through approximately 5 other people[3].  Microsoft researchers more recently confirmed this principle after studying 30 billion instant messages[4]. And social media, as expected, may make that even smaller–Facebook now estimates that around 3 degrees of separation [5].

While I may have a path that connects me to so many people, that does not address how those connections influence me.  Nicholas Christakis and James Fowler, pioneering social network scientists, showed that for a myriad of states, like happiness, loneliness, and even obesity, each person has about three (3) degrees of influence.[6]

This effect also works similarly for unhappiness and speaks to the idea that emotions are contagious. Reflect on a room that you have walked into and there is someone who is upbeat.  You are lifted, at least somewhat, by being in their presence.  You share that lift with others.  And so the emotion ripples through at least three other people.  Now imagine that the driver’s boss was kinder that day—what could have happened?

How do we reconcile this influential, interconnected network with the strong culture of individualism, i.e., we make (control) our own decisions and destinies?

“We cannot live only for ourselves.

A thousand fibers connect us

with our fellow men; and among those fibers,

as sympathetic threads, our actions run as causes,

and they come back to us as effects.”

Imagine a piece of fabric that is very broad with many layers.  Each thread is a person—it has its own unique shape, quality, color, and resonance.  It touches many other threads in all 3 dimensions.  The unique and diverse qualities of each thread express themselves through the fabric.  Well-woven, the fabric is resilient to challenges, strengthened by its diversity.  Kindness and mutual respect are the forces that bind the fabric.

This fabric was described by Herman Melville, the 19th century author of Moby Dick, who wrote: “We cannot live only for ourselves. A thousand fibers connect us with our fellow men; and among those fibers, as sympathetic threads, our actions run as causes, and they come back to us as effects.”[7]

Look around—see it for yourself and then admire it for its elegance.

[3] Or Kevin Bacon, as in the game Six Degrees of Separation From Kevin Bacon

A Maryland couple stranded on Interstate 95 in Virginia distributed bread from a nearby bakery truck after calling the company to ask for permission.
8    View on Facebook

Envision Kindness
Wishing you and your families and friends a happy and healthy 2022 #HappyNewYear from Prof K!

Davyon Johnson, 11, has been honored for his Dec. 9 interventions but says he doesn’t understand the attention he’s drawn. It was “the right thing to do,” he said.
4    View on Facebook

Envision Kindness
A great story that illustrates how kindness creates meaning. After saving a life, this teenager now understands that she has the ability to "contribute to society." Worth listening to!https://www.cnn.com/videos/us/2021/12/21/mcdonalds-teen-saves-customer-pkg-vpx.kare

A McDonald's teen employee hopped through the drive-thru window to save a customer who was choking on a chicken nugget. CNN affiliate KARE has more.
4    View on Facebook

Envision Kindness
Anti-Bullying Week may be coming to an end, but let's keep the kindness going!

Envision Kindness
What if #WorldKindnessDay was everday? It is possible. When people see #kindness #caring and #connection, everything changes. Happy WKD. Thanks to all those who want to make the world kinder.