By Allie Cashel
Posted
In Stories
0

On World Kindness Day 2019, we reached out to the Envision Kindness community and asked them to share stories of kindness, joy, and love. Today, we share Alyssa’s story. For two years, Alyssa was a hospital bedside buddy with the nonprofit StudentsCare. Her story takes place over this time period at Holtz Children’s Hospital in Miami, FL. 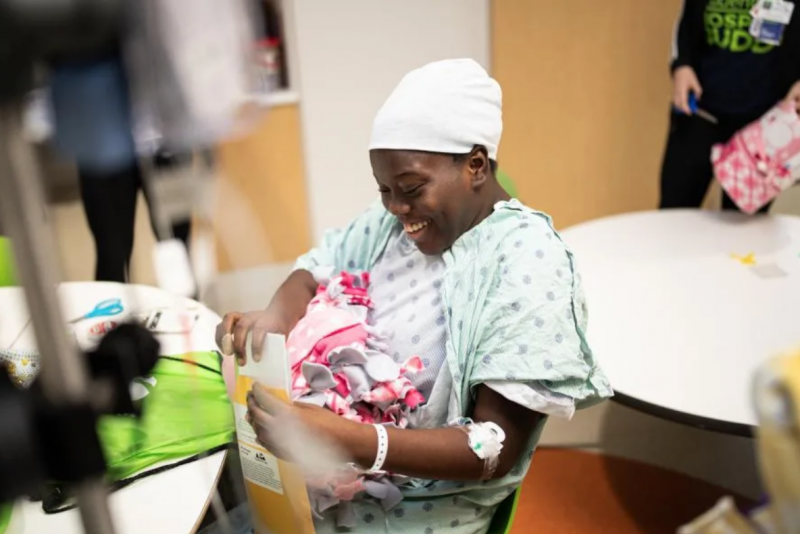 This is an image of a patient opening a Comfort Kit, which includes good quality toiletry items, gift cards, headphones, games, and other resources our StudentsCare volunteers give out to patients to help improve their hospital stay.

The narrator of Disney’s Hercules, before he was replaced by the Muses for making the movie sound like a Greek tragedy, poses the question: but what is the measure of a true hero?

As a kid, I wanted to be a superhero. One of my fondest memories was religiously watching Smallville on Tuesday nights, cheering on Clark Kent on his journey to becoming Superman. If I’m being honest and transparent, I still want to be a superhero. With the entertainment industry becoming saturated with superheroes, I think the question is more relevant today than ever. Over the past two years, the answer has begun to be revealed to me and it comes from the heroes that have changed and saved me in ways I did not know needed saving or changing.

To give you an idea, my heroes have been a toddler who shows his gratitude to others by saying “Thank you, my darling,” a seven-year-old who might possibly be the best Tic Tac Toe player in the US, and a six-year-old who was never afraid to break the gender stereotypes. I met these heroes as a StudentsCare hospital buddy at Holtz Children’s Hospital.

Although they are some of the strongest heroes I have ever met, sometimes the bad guys they fought got the better of them. The aftermath was evident in rooms with lonely children because their parents had to work to pay their medical bills. Rooms with parents who had sacrificed their jobs and traveled far from home to be with their kids, but rarely got a break because they had no one to talk to or relieve them. There were also beeping alarms going off every minute and tubes coming out of little noses and arms. Sometimes the units were quiet. Not every hero wins their battle.

But luckily, these heroes took me under their wing and taught me how to battle the bad guys alongside them. I played with boys and girls, alleviating their loneliness while their family was away. One of my favorite memories was playing ambulance and having to make a pit stop at McDonalds to buy chicken nuggets before getting the patient (aka me) to the hospital. Sometimes I relieved parents for a break or was the kindred spirit they need to talk to. My first buddy and her mother only spoke Spanish. On days that my buddy was asleep or not feeling well, her mom would ask me to accompany her since I was one of the few people she could communicate with. I’ve held squirming hands during procedures at the bedside and napkins and buckets to avoid getting vomit on bed or clothes.  I’ve also been the only friend able to attend my buddy’s hospital birthday party. After all these experiences, I was never the same person. I learned something that would help make me not only a better future physician but also a better person.

At the end of Hercules, Zeus shares that “a true hero isn’t measured by the size of his strength, but by the strength of his heart.” Although my buddies experienced aggressive and rough treatment, they never lost that kid thing. Despite what they were going through, they had a smile, they made you laugh, and they made your heart and soul light (even though they were wiser beyond their years). My buddies are my true heroes. I’ll never forget my heroes and I plan to keep fighting for their cause with what they’ve taught me. Childhood illness sucks, but we can fight it with hope, a smile, and heart.
Learn more about Kindness Buddies and Students Care at www.students-care.org